I guess we now know why Chris Christie lauded Newark's state-appointed superintendent,  Cami Anderson, at his distraction from Bridgegate State of the State address: they are kindred spirits. Both love to bully underlings, and neither brooks dissent:

Ms. Anderson's action in suspending the four principals is the last straw in a chain of inept, and horribly out-of-touch decisions. The people of Newark need to hear the views of those within the school system who disagree with Ms. Anderson. The four principals have a constitutional right to speak out. The Newark school district is not a military dictatorship, and Ms. Anderson is neither an army general nor a police chief. Her behavior must be governed by the principles of our democracy.

Whatever one thinks of Ms. Anderson's political and educational ideology, she has proven time and again that she holds in contempt the opinions of the people of Newark. From the beginning, she has not consulted with Newark's parents, community and political leaders, or professional educators on any significant decision. Most recently, she announced and began implementing her " One Newark" reorganization plan on the people of Newark with no consultation and no advance notice. In doing this, she ignited a firestorm of opposition from outraged citizens.

The suspensions are the final outrage. Ms. Anderson's tenure has outlived whatever usefulness it had. I call on Governor Christie to remove her immediately before she can do any more damage." [emphasis mine]

Look, I understand that there are consequences for speaking ill of your boss. But NPS is a public institution. These are public schools. Have we decided that dissent on policy - not personal attacks, not invective, not slander, but having disagreements on public policy - is now a fireable offense?

I can't embed the video of the principals speaking on Wednesday's forum; it's on Facebook, so check it out there (hope Zuck doesn't remove it...). I think you'll find what I found: none of these dedicated educators said anything that should lead to their removal.

Cami Anderson is a public servant; she is in her position to serve the students, the parents, the citizens... and yes, the teachers and principals of Newark. They are the ones who are in the schools every day, working and striving to overcome the disgusting segregation and racism and sexism and classism that afflicts their students. They are the ones who know how hard it is for the beautiful, deserving children of Newark to learn in crumbling, dangerous schools that have been neglected by the state for years. They are the ones who have to tell the parents of Newark that, unlike the parents of Millburn, they can't rely on having a clean, well-maintained, well-staffed, well-resourced school in their neighborhood with teachers and principals who are respected and supported.

State Superintendent Anderson, despite her inexperience, ought to at least understand that she is in Newark to serve the people of the Brick City, and not to impose her will. What does it say about her plans - like One Newark - when her own people aren't on board? What does it say about her "leadership" that she is fomenting a rebellion within her own buildings? What does it say about the culture that she has created when the parents are filing lawsuits, the teachers are demanding an audit of the district, the students are out protesting in the streets, and the principals have no choice but to demand the resources they need for their students in a public forum?

One Newark is a wet dream for the Andy Smaricks and RiShawn Biddles of the world: choice, choice, choice! But it never occurred to these fine reformy folks, or Anderson, or NJDOE Commissioner Cerf, or Governor Christie, that maybe the families of Newark don't want to be treated differently than the families of Basking Ridge. Maybe the system that the families of Hunterdon and Sussex Counties demand for their children should be the same system used in Newark. Maybe Newark's parents ought not to be told to "vote with your feet"; maybe, like middle-class white people all over this state, they just want to vote with their vote. 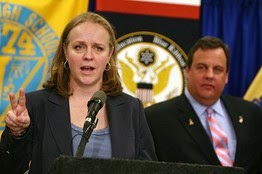 Two peas in a pod.

ADDING: Again, I don't know Ras Baraka from Adam. But he is pissing off all the right people, and that is a good thing.