Look to our charters. At KIPP's TEAM Academy Charter School in Newark students attend school from 7:30-4:00 Mondays through Fridays and also go to school two Saturdays a month. The school year begins in August and goes through June. TEAM's students regularly outperform peers at other area schools despite similar demographics. [emphasis mine] 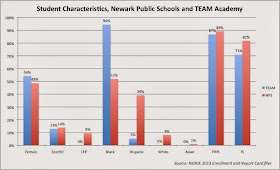 Newark's charter schools do not serve the same population of students as the Newark Public Schools.

TEAM may well be a fine school; it's one of the better charters in Essex County at trying to enroll the students who are underserved by many of the other charters in Newark. But it does not serve the same types of students as NPS. And when you consider TEAM's student population, its outcomes are good, but not spectacularly better than the local public schools.

Look, I'm all for a good debate on this stuff. Maybe TEAM's longer day has benefits. But we can't assess whether it does unless we all agree on the facts. We can't make any good education policy decisions unless we look at the data we have appropriately and correctly.

Note: The original graph I had up for a bit had slightly wrong percentages (weight your averages, JJ - duh...). Sorry about that; want to get this stuff exactly right every time.