Michelle Rhee’s call this morning at 10:25 on Twitter, saying “I’m around for a bit, does anyone have any questions for me?” was like dumping pretzels on a beach filled with hungry seagulls.
The Twitterverse lit up with questions that came fast and furious, and overwhelmingly from critics of Rhee, the former D.C. schools chancellor and current lightning rod for issues around school reform.

“What are good ways to teach kids cheating is wrong when you’ve been caught doing it yourself?” one questioner asked, referring to allegations of systemic cheating on standardized tests during Rhee’s tenure as chancellor from 2007 to 2010.
“Since your donors include folks that profit from your agenda, how exactly are you helping school kids?” asked another, referring to Rhee’s political advocacy group, StudentsFirst, which is trying to influence education policy at the state level.
“What do you do for fun now that you don’t get to fire principals & teachers anymore?” asked another tweeter.
“What is your favorite part about being a union buster?” read another.
A posse of Twitter users retweeted a question asking why Rhee doesn’t publicly disclose donors to StudentsFirst. [emphasis mine]

I went to Rhee's Twitter feed to look at her answers, and guess what? They aren't there. Did she even attempt to answer them? Or does she need to run them through a committee first?

Michelle Rhee clearly can't handle being in a real debate: she backed out of a chance to go head-to-head with Diane Ravitch, even after Ravitch acquiesced to her silly demands. And when Rhee had her achingly pre-scripted "town halls" this past fall, she couldn't even answer a critic who is a student.

I can understand her fear: as I've said before, Michelle Rhee is not very good at her job. The only time I can recall her being in a debate on neutral ground -- the BBC, of all places -- she got her clock cleaned.

Keep that in mind, then look at the timestamp on her tweet today (annotation mine): 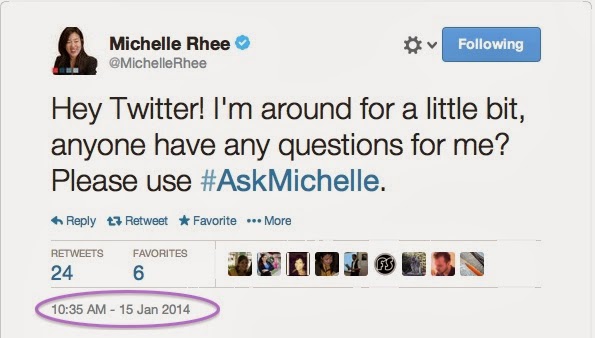 Yes, folks: Michelle Rhee asked for questions at 10:35 AM EST* on a Wednesday morning.

How many educators do you know who are available to tweet in the middle of a morning on Wednesday? I mean, besides Steve Perry...

Is Rhee so obtuse she didn't know teachers would be right in the middle of work in most of the country? Or does she prefer to make her offers to answer questions when she knows teachers won't be available?