UPDATE: I take a look at the finances behind Pitbull, SLAM, and the charter's management company, Academica. It ain't pretty.

UPDATE: Mother Crusader has more on the background of Pitbull. Darcie, by the way, is the mother of two adorable daughters. I wonder how other mothers might feel about sending their daughters to SLAM after reading what she found.

But, as exciting as it will be to hear from these reformy luminaries, they aren't even the main attraction: 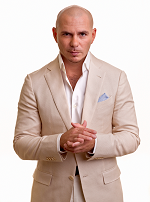 Miami-native Armando Pérez (Pitbull)—also known as "Mr. Worldwide" and "Mr. 305"—is a globally successful musician, performer, business entrepreneur, fashion icon and actor whose career sales exceed 5 million albums and 40 million singles worldwide. Pitbull has had #1 hits in more than 15 countries and his videos have been viewed more than 3 billion times. His world tour sold out concerts in Latin America, Canada and Europe, before bringing the party to the United States, Japan and Australia.

Mr. Pérez’s commercial success has solidified his influence in his hometown community. He is making the most of his position as a civic leader in Miami by opening the Sports Leadership and Management (SLAM) charter school for youth of the city. SLAM seeks to provide an in-depth educational and career-preparation program through “3 R’s”: rigor, relevance, and relationships. The school’s first cohort of students will begin classes this fall.

Let's leave aside any discussion, for the moment, as to why anyone would think Pitbull is in any way qualified to receive taxpayer funds to run a school. Let's instead take a short tour of Mr. Perez's music, and hopefully gain an insight into the values he hopes to impart to his young charges at SLAM.

Courtesy of the website MetroLyrics, here are some prime examples of Pitbull's "art" [all emphases mine]:

I've been to countries and cities I can't pronounce
And the places on the globe I didn't know existed
In Romania, she pulled me to the side and told me
"Pit, you can have me and my sister"

In Lebanon, yeah, the women are bomb [Yes, he really did say that. - JJ]*
And in Greece, you've guessed it, the women are sweet
Spinned all around the world but I ain't gon' lie
There's nothing like Miami's heat

En Colombia women got everything on
Some of the most beautiful women I've ever seen
In Brazil, is freaky big o' booty
And they bounce, blue, yellow and green

She told me that her mama's Latin, her dad Asian
Abuela está loca, abuelo Hatian
Y yo soy Cubano and I'm impatient
So do me a favor, let's skip conversation
I just wanna taste ya ASAP
Take ya ASAP, to the room ASAP
Zoom zoom ASAP, boom boom take that
Ooh, I like that when you fight back [Is there any way to interpret this other than as a rape fantasy? - JJ]

Bring your girls,
its whatever tonight,
your man just left,
I'm the plumber tonight,
I check your pipes,
oh, you're the healthy type.
Well, here goes some egg whites.
Now gimme that sweet, that nasty gushy stuff,

Fuego
You think you gangsta'

Cause you did time
Well, listen here, gangsta
Don't cross the line

Mr. Collipark
If you think it's a game, you play with it right
Ain't nothin' safe when them guns start

Pequeño JuanBoy, you killed this one dog

My life, Vincent Van Gogh couldn't paint it
And I love that you hate it
I fuck 'em, you date 'em, I'm hotter than Satan
Look partner just save it

Folks, I'm not a prude, but seriously: yuck. Hey, Joel, are you down with all this?

ADDING: Everyone deserves a second chance.

Rapper Pitbull has been arrested for DUI - twice - and has admitted to once being a drug dealer in Miami, but that's not stopping Commissioner Tomas Regalado from giving him the keys to the city.
The 28-year-old rapper, born Armando Perez, will be presented with the keys by Regalado during a ceremony Wednesday morning at City Hall.
Pitbull was busted in December 2007 for driving under the influence after his Mercedes was clocked going 93 mph on the Palmetto Expressway. The arrest report noted that Pitbull had a strong odor of alcohol on his breath, his eyes were bloodshot and watery and his speech was slurred. He also failed all field sobriety tests, according to the report.
He reportedly tried to brush off the incident, telling the arresting officers, "This is a big waste of time your time, papo."
He later refused a Breathalyzer test. The case was finally closed just last month, and Pitbull was found not guilty in the incident.
The rapper had previously pleaded no contest in another DUI case in March 2001 and only paid a fine.
Pitbull, also known as "Mr. 305," has talked about his rough past in several interviews, claiming his father dealt drugs in the '80s. He said he began to follow in his father's footsteps, but music set him straight.
Aside from the DUIs, Pit has mostly stayed out of trouble and does a lot of charity work around the city.

Good for him. So why not stick with that and leave running public schools to professional educators? I mean, you don't see me running around telling strippers to "work that pole," do you?

Let's each do the jobs we are best prepared to do.

In Lebanon, yeah, the women are bomb

According to Wikipedia, the song was released in May of 2011. It's worth noting that the Israel-Lebanon border clash took place in August of 2010. This was followed by the collapse of the Lebanese government in January, 2011. In other words: at the time Pitbull must have been producing this song, Lebanon was very much in the news.

I'm not going to get into the politics of the Mid-East here; my knowledge of Lebanese history is extremely limited, and I know the various sides in the conflicts around Lebanon have very strong views as to who is to blame. I will, however, point out that this country has a sad, bloody history of conflict in which many people - including children - have died. The conflicts that have dogged Lebanon continue to this very day.

I wonder if Pitbull ever thought about all of this as he was making his little song and his little joke.