The Selling Out of Newark's Schools: Part I

If you're really interested in transparency, what better time is there to release secret emails than Christmas Eve?


The City of Newark released dozens of emails to The Star-Ledger late on Christmas Eve to comply with a Superior Court order.

Among the behind-the-scenes details never disclosed, the emails showed the Newark philanthropist Ray Chambers wanted to arrange a million-dollar donation, but a top aide to Mayor Cory Booker dismissed it as too small.

Indeed, the heavily redacted emails provide a window into how Booker’s aides and others courted wealthy donors days before Zuckerberg pledged the historic gift intended to revamp the troubled school district in front of a national audience on "The Oprah Winfrey Show." [emphasis mine]

I've been through the batch, and what I see is a mayor and his staff - along with the then-ACTING Education Commissioner, Chris Cerf - courting wealthy donors outside of Newark so they can remake the schools the way they want them.

A quick recap: Facebook founder Mark Zuckerberg was coming off of some bad press when The Social Network was released in 2010 and made him out to be a bit of a schlub. Looking for an image makeover, Zuckerberg pledged to give Newark's schools $100 million - if his donation could be matched. Apparently, Zuck's original idea was to get a bunch of micro-donations rolling in from the little people; Booker's team quickly explained that this is not how the real world works:


A few days later, Sarah Ross — a close adviser to Booker and a co-founder with him of a social media venture — described a "community donation mechanism" of small, individual donations as "super important to Mark and Facebook."

"They believe it’s bad positioning for Mark if only higher end donors are able to contribute to the matching funds in large chunks," Ross wrote on Sept. 18, 2010, even though that’s exactly what happened. In another message, she noted: "Consumer donations is a hot button for them right now."

Mattes pushed back on the approach the next day, explaining that donations of $50 or $100 in a "$250M fund will strike most as irrelevant and not worth it." She noted that the mayor’s tweets about his re-election efforts only netted about $2,000.

And there you go: "positioning" was what this entire thing was about, wasn't it? Except the problem with the big-money strategy was that it was going to fly in the face of the goal of getting Newark's schools back under local control after years of living under the thumb of the state. And Booker's people knew the good folks of Newark would have a problem with that:

In the days leading up to the announcement of a $100 million gift to Newark schoolsFacebook's COO Sheryl Sandberg and Newark officials identified three areas that could be hurdles to a smooth implementation: building community support, attracting other donors and hiring a new superintendent, according to newly released emails.
In fact, those three areas proved problematic in the months–and years–after Facebook founder Mark Zuckerberg said he would give money to New Jersey’s largest city, provided an equal amount of matching funds were raised.

[...]
Booker wrote: “This is one of our biggest concerns right now as we must be ahead of the game on community organizing by next week.” A mayoral adviser outlined a rough plan to spend $315,000 on efforts such as polling, focus groups, mailing and consultants. The foundation has spent at least $2 million on such efforts since.
It was also clear early on that Zuckerberg’s donation largely would be invisible to parents, students and teachers. State officials have said they always envisioned that a bulk of the money would help pay for a new teachers contract.
“MZ’s money is not going in to classrooms,” Booker aide Sharon Macklin wrote on Sept. 19, 2010. Instead, aides discussed how to allow small donors to fund individual projects, and Macklin suggested they would “get a lot of local props” for that.
Newark residents who are critical of Booker at school board meetings often say they are wary of outsiders and would rather have a superintendent who has some connection to the city. Sandberg appears to have been concerned about how the gift would be viewed. In an email to Booker and other Newark officials, she wrote that a draft of a press release about the donation used “too much ‘national’ language.”
“I wonder if we should basically make this focused on Newark with just a touch of ‘and this will be a national model,’” she wrote.
In fact, the mayor and the gift drew immediate criticism from Newark residents because it was announced by Booker, Zuckerberg and New Jersey Gov. Chris Christie on The Oprah Winfrey Show, which is taped in Chicago. 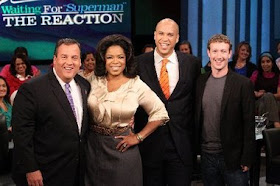 Don't worry, Oprah - we would never ask you to come to Newark!

That's from an article in the Wall Street Journal by Lisa Fleisher, who covered New Jersey politics for years at the Star-Ledger. She knows as well as anyone that Newark has always felt like it's being controlled by outside forces - particularly its schools. Only a few months after Zuckerberg made his announcement, the S-L reported that the foundation of California billionaire Eli Broad had paid for a secret plan to close down large numbers of Newark's schools and convert them into charters. Cerf, a Broad crony, wound up changing his story about all this in the press (another example of his fast and loose standards).

I can't say for sure, but the worry Booker's people had for the local reaction to the Zuckerberg gift seems to suggest that they knew school closings were in the works, and the community was not going to like them, as they were yet another example of the state imposing its will on Newark's schools. It turns out that the state did, in fact, everything in its power to retain control, including altering the district's oversight evaluation.

Further, we now we know, from the very beginning, that the plan was never to take Zuck's bucks and use them to improve the Newark schools. No, they always had something else in mind:

The donation has been managed by the Foundation for Newark’s Future, and about $50 million of the gift has been spent to pay for a new contract with Newark’s teachers that introduces merit pay. Millions more are expected to help fund an expansion of the city’s charter schools, which educate about 20% of Newark’s students.

A week before the September 2010 donation was public, Sandberg asked Booker in an email about spending plans for the first 100 days and details of how the mayor planned to obtain support from residents.

Booker wrote: “This is one of our biggest concerns right now as we must be ahead of the game on community organizing by next week.” A mayoral adviser outlined a rough plan to spend $315,000 on efforts such as polling, focus groups, mailing and consultants. The foundation has spent at least $2 million on such efforts since.
It was also clear early on that Zuckerberg’s donation largely would be invisible to parents, students and teachers. State officials have said they always envisioned that a bulk of the money would help pay for a new teachers contract.

Those state officials are, of course, pretty much the bought and paid for servants of Eli Broad, who has had his eye on breaking the teachers unions for quite some time. The NTU and the AFT played right into their hands; Zuck's bucks have brought merit pay to Newark, and the reformies think it's a template for the rest of the state, if not the nation.

And so the fears of Newark's citizens, as so eloquently expressed by this woman - and so casually dismissed by the NJ punditocracy - have finally come true:


Back at Science High, even the Facebook gift was regarded with suspicion.“The foundations are interfering with public education and dividing our community,” says Cassandra Dock, a local resident. “Leave us alone. We don’t want white people coming in here and doing what they do — taking over. Destroy and leave.” [emphasis mine]

There's more to say on the emails, but I'll save that for the weekend. 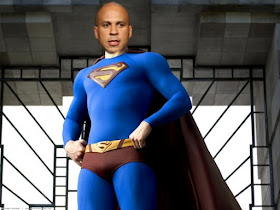