The Faith-Based Education Policies of @ArneDuncan

The havoc Duncan has wreaked upon America's schools will likely take decades to undo:
And, perhaps worst of all, Duncan has denigrated the real concerns of parents, teachers, and students, using the most condescending language possible -- all while hypocritically exempting his own children from the effects of his policies.

How is it possible for a man with the influence and power Duncan yields, working for a president who espouses progressive ideals (even if he doesn't always live up to them), to leave such a disastrous legacy? I contend it's the same reason so many "reformers" admire and respect the man: they, like Duncan, are believers in faith-based education policy.

Here's a story that illustrates what I mean:

Back in 2011, Carol Burris, America's Principal™, had a back-and-forth with Arne Duncan over the use of test results in teacher evaluations. Again, anyone who has studied this issue knows that Value-Added Modeling (VAM) produces statistically noisy and unreliable data that is highly prone to error.

There is a case to be made for using VAMs to inform, as opposed to compel, decisions. Such subtlety is lost, however, on Duncan, who was enthralled at the notion of using tests as measures of student "growth" that could, in turn, be used as proxy measures of teacher effectiveness. Burris and Kevin Welner, director of the National Education Policy Center, expressed their concerns to Duncan in a letter that spelled out the problems with using VAMs to evaluate teachers.

Burris and Welner describe what happened next in an article for Phi Delta Kappan (behind a paywall):

On Aug. 17, three weeks after we sent this letter, Secretary Duncan called Burris again. Among other things, he said he supports peer review of teachers; however, he still believes student test scores are an important evaluative component.

During this second call, Burris described why teachers at her school were now hesitant to take on at-risk students. Secretary Duncan didn’t believe that they should be reluctant, expressing his faith in the capacity of value-added models to compensate for bias in student assignment. The Secretary’s apparent brushing aside of the limitations of value-added modeling illustrates a very important point: If policy makers do not understand the research concerning the technical limitations of this tool, they will support policies that rely on the models to produce valid and reliable numbers for individual educators. [emphasis mine]

So forget the research. Forget the concerns of practitioners who have to work under a system they don't subscribe to. Forget the empirical evidence that shows outrageous bias in the use of growth measures in Burris's own home state. All that matters to Arne Duncan is his "faith" in a policy that the evidence does not support.

As Paul Thomas says, we now live in a "belief culture." Powerful people like Arne Duncan feel no need to shoulder the burden of proof -- their "faith" trumps any evidence or logic that runs contrary to their predilections.

And so now America, the most powerful nation in the history of the world, is dismantling its education system on the basis of nothing. Bring on the tests, no matter their inaccuracy and pernicious effects. Evaluate teachers by those tests, even if it's destroying the profession. Open even more charter schools, no matter how spotty their track records may be. Arne Duncan believes this is all necessary; that should be good enough for you and me, pesky evidence be damned.

The news that John King, perhaps an even bigger hypocrite than Duncan, will take over at the DOE is cause for great concern. Dark days are ahead for American public education -- but let us at least give some small thanks that Arne Duncan will soon no longer be in a position where his dogma dominates our nation's discourse on education.

Perhaps I'm overly optimistic, but I do hope that Duncan's departure means we can soon have a conversation about our schools that is based on evidence instead of ideology. 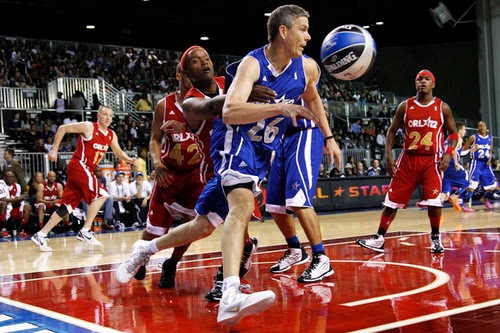 If you promise to never come back, the NBA will let you keep playing. Deal?