Up until now, I've stayed out of the internal politics of teachers unions. I outlined my many reservations about the Newark contract, but I didn't feel it was right to tell teachers to vote it up or down. I had my preferences in the New York City teachers union elections as well, but I kept my mouth shut, because I didn't think I had anything to add that was helpful.

But I'm going to make an exception today: Chicago teachers, please re-elect Karen Lewis as the President of the Chicago Teachers Union.

No one has done more to make unions relevant again than Karen Lewis. The Chicago teachers strike was a wake-up call to monied corporate interests everywhere; they learned, the hard way, that organized working people are a force not to be trifled with. That strike never would have happened without the brains, skills, and resolve of Lewis.

Chicago teachers, you need someone who is going to stand toe-to-toe with the likes of the obnoxious and odious Bruce Rauner and the insufferably smug and hypocritical Rahm Enamuel. Karen Lewis has proved, time and again, that she is not in the slightest bit intimidated by these foes of the working class and Chicago's children.

Now, I'm all for a spirited campaign with a sincere debate about the record of the incumbent. Unfortunately, that doesn't appear to be what Chicago's teachers are getting:


During the contract negotiations last summer, Karen Lewis established the "Big Bargaining Team," and designed it to be inclusive. That team included Tanya Saunders Wolffe and Mark Ochoa. Today, both of them are claiming that the CTU leadership failed to negotiate a "moratorium" on school closings. But they didn't mention that during the months they were actually with the union's leadership at the bargaining table. Nor have they admitted, although they will soon have to, that it was illegal for the Chicago Teachers Union to bargain over school closings (a management right) unless CPS agreed to it, and CPS didn't. [emphasis mine]

It's really easy for these Monday morning quarterbacks to come in and complain that Lewis didn't get them everything they think they deserve. But there's little doubt, give the dysfunction of the CTU before Lewis took over, that things would have been far, far worse were she and her team not at the reins. Lewis's CORE slate has shown they can get the job done; the other side may (or may not) mean well, but they simply aren't ready for the big game.

And if you need further proof that the plutocrats are afraid of Lewis, simply look at the fawning treatment Lewis's opponent has received from corporate media shills like the Chicago Tribune and Fox News. For me, that alone is enough reason to vote for Lewis.

Chicago teachers, I hope you understand how lucky you are to have this woman as your local's president. I hope you understand how many teachers outside of Chicago wish they had a strong labor leader willing to stand up for their rights. I hope you appreciate what Lewis means to the rest of us outside of Chicago. I saw Lewis speak to a group of teachers in New York City, and it was like watching a rock star; she is that beloved, and she is that good.

Do yourself a favor, Chicago: vote Karen Lewis and the CORE slate this Friday. 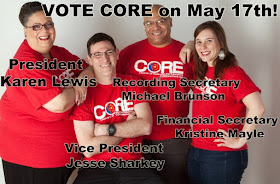 ADDING: Like me, Fred Klonsky wishes he taught in Chicago, if only so he could vote for CORE.