Once again, it's time to play "Spot the Pattern!" Can you find the pattern that emerges from these reformy stories from around the country? [all emphases mine]


In what would be the largest public school closing in US history, Chicago officials are proposing to shutter 61 schools, 9 percent of the 681 schools citywide.

A factor deeply embedded in the debate over the closings is race: The majority of students in CPS are either black or Hispanic, and the Sun-Times reports that most of the schools targeted for closure are located on the far South and West sides of the city, which have been plagued by street violence. City homicides surpassed 500 last year, a four-year high; most were shooting deaths located in areas known for marginalized schools.


When the city shuttered 23 schools in 2008, students from the closed schools were more than twice as likely to enroll in a charter school as students from other schools. This time, 2,600 students are to be displaced, and Catania asked Henderson to explain how she would ensure that they wouldn’t leave the system.
“You’re absolutely right in that many charter schools, because of their proficiency rates, offer, at least on the surface, a better opportunity,” Henderson said. “We’re going to have to work really hard.”
Henderson said she would submit a transition plan to the council by Feb. 15.
The hearing was Henderson’s first appearance before the Education Committee, constituted this month to bring new focus to oversight of city schools. Education had been handled since 2007 by the council’s Committee of the Whole, a forum in which other issues often overshadowed the subject.
“We have been missing in action for six years,” Catania said. A key committee priority will be helping establish a comprehensive plan for the coexistence of charter and public schools, he said.
While council members focused on avoiding future school closures, activists announced Wednesday that they plan to challenge in court the latest round of closings. They say the closures disproportionately affect African American children and students with disabilities.
Black students make up 72 percent of the school system’s total enrollment but account for 93 percent of the students affected by the closures, said Mary Levy, a longtime school system watchdog.

New Jersey Classifications
This first figure shows the demographic composition of schools by their classification. Perhaps the most astounding feature of this graph is that priority schools are nearly 100% black and Hispanic, while reward schools have very low levels of low income, black or Hispanic students. 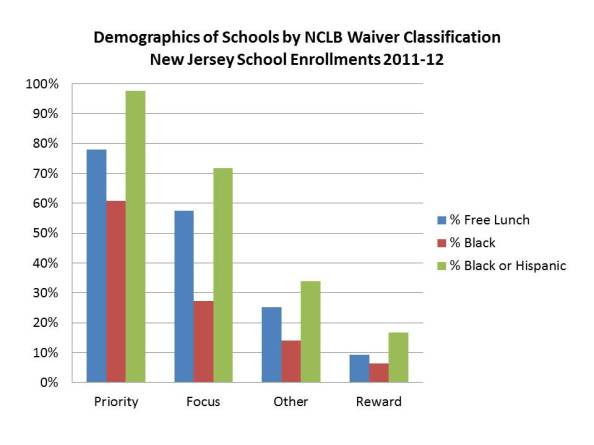 
My office is analyzing Superintendent William Hite's proposal to close 37 district-run schools, which will ultimately displace thousands of students, and which could have devastating repercussions for many neighborhoods. In a prior review of vacant school facilities, my office found that schools that were closed and remained vacant for many years had become havens for illegal and dangerous activity. In the most egregious case, a vacant school was ravaged by a four-alarm fire that put its neighbors and the city's firefighters at risk.

The imminent school closures will affect 15,000 students who are disproportionately concentrated in some of Philadelphia's poorest neighborhoods. In a district that is 55 percent black, nearly 80 percent of the affected students are African American.


CHICAGO –The Chicago Teachers Union President Karen Lewis said the following at a news conference regarding proposed school closings:
“We are standing here today in the beautiful Mahaila Jackson elementary school in our city’s Auburn-Gresham neighborhood. This school was named for one of the greatest gospel singers in our nation’s history, a woman who sang at Dr. Martin Luther King, Jr.’s funeral, a woman who was instrumental in our Civil Rights struggle. Unfortunately, we are gathered here today not to talk about this pioneer or even about how this school does an outstanding job of providing a great learning community for some of our special needs students. We are standing here because this school, along with scores of others, has been targeted for closure by Mayor Rahm Emanuel’s Chicago Public School district….
“Closing 50 of our neighborhood schools is outrageous and no society that claims to care anything about its children can sit back and allow this to happen to them. There is no way people of conscious will stand by and allow these people to shut down nearly a third of our school district without putting up a fight. Most of these campuses are in the Black community. Since 2001 88% of students impacted by CPS School Actions are African-American. And this is by design.


Those complaints asserted "the district's Nov. 26, 2012 decision to close Red Cedar Elementary in 2014 will have a discriminatory, adverse impact on non-white minority students," Bradshaw said. The two complaints were consolidated into one.

The East Lansing school board voted on Nov. 26, 2012 to shutter Red Cedar Elementary, which is home to the East Lansing's most diverse student population, as part of a larger district overhaul. The decision came after the district's voters rejected a bond proposal that would have repurposed the school at 1110 Narcissus Drive as school office space, and after years of debate over the district's future and months of public outcry against closing the school.

A lawsuit filed today seeking to keep open three Brevard schools slotted for closure claims that the matter is an issue of civil rights.
Closing Gardendale and South Lake elementary schools and Clearlake Middle School would disproportionally affect low-income minority students, it says – while keeping a school in a more affluent area open.

The lawsuit alleges that the school district originally considered criteria that would balance free-and-reduced lunch rates between schools and ethnic diversity – criteria that was excluded when the school board voted on closures.
It also says that Sea Park Elementary in Satellite Beach met more criteria for closure, but will not be shuttered. About 18 percent of students at the school are minority, according to data

from the Florida Department of Education.
“When they are making changes to something as crucial as a school, you cannot ignore facts and figures and you cannot run away from the hard questions being asked,” Elahi said. “When we looked at the numbers ourselves, it didn’t make sense.”
More than 40 percent of students at Gardendale Elementary and Clearlake Middle are minority, as are about 60 percent of South Lake students.


The US Department of Education is investigating a complaint that the Boston school system’s plan to close or merge more than a dozen schools to save money discriminates against black and Latino students and their parents.

The complaint was brought Jan. 25 by the Black Educators’ Alliance of Massachusetts and the Lawyers’ Committee for Civil Rights Under Law of the Boston Bar Association, alleging a significant disparity in the races of students who would be affected by the school district’s plan. The School Committee approved the plan in December as a way to help plug a $63 million budget gap.

“Historically, disproportionate numbers of school closings have occurred in the predominantly black neighborhoods of the city,’’ said Nora Toney, president of the Black Educators’ Alliance. “The school closings have had a profound impact on our students, families, and community, creating constant disruption, instability, and uncertainty, while failing to provide the quality schools promised by the district.’’

The complaint asks federal authorities to investigate what options the school district had, other than closing schools. In a Feb. 15 letter, the US Department of Education’s Office of Civil Rights told the alliance that, although it was not making judgment at the time, it would look into the matter.

Also, the complaint alleges, the school closings affect a disproportionate number of students in low-income neighborhoods such as Roxbury, Dorchester, and Mattapan, compared with neighborhoods serving higher percentages of white students, such as West Roxbury, Roslindale, and Brighton.

The NJ Department of Education (NJDOE) under Acting Commissioner Christopher Cerf is gearing up to intervene in 75 predominately Black and Latino “Priority” Schools, action that could lead to massive school closings within three years. The schools targeted by NJDOE for closure are in very poor neighborhoods across the state and have served these communities for decades.
The NJDOE plan for “aggressive intervention” and potential school closures is the centerpiece of a new “accountability” initiative launched by the Christie Administration after obtaining a U.S. Department of Education waiver from certain provisions of the federal No Child Left Behind Act (NCLB) in 2011. The waiver allows NJDOE to use test scores and graduation rates to create three new classifications of schools: “Priority,” “Focus” and “Reward.”
Priority Schools are targeted for immediate intervention by the NJDOE, including replacing principals, reassigning teachers and restructuring curriculum. If these schools do not “improve” quickly – or within two years – the NJDOE can order the school closed or converted into a charter school. Focus Schools face similar interventions, but have more time to improve. Reward Schools receive bonus funding, including federal Title 1 funds that can be shifted from other high poverty schools.
In early April, NJDOE released the list of schools in the new classifications. An ELC analysis of the list shows:
Priority Schools – those potentially targeted for closing – are almost all Black and Latino, very poor, with many students who do not speak English as a first language. The student mobility rate in Priority Schools is a staggering 24%. These schools are located in some of the poorest communities in the state.

So the plan is consistent no matter where it is implemented: close neighborhood schools in poor and minority communities, then move the children into one of two "options":


Mind you, this isn't happening in the leafy suburbs. No, this plan is applicable only to other people's children - you know what I mean? (wink, wink)

The poor children of color who either opt to stay or are forced to stay in the real public education system are now being herded into crowded, underfunded, segregated, and distant schools. It's the new American apartheid; I don't think P.W. Botha could have come up with a better plan... 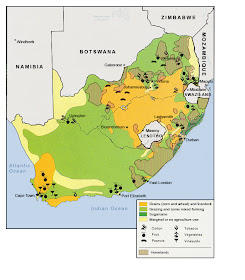 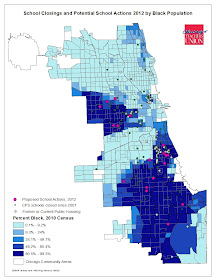