Rhee on Stewart: A Breakdown, Part I

UPDATE: I forgot to post the link to the table below, and now everyone is rightly asking "Who made that excellent table?"


The very shy Michelle Rhee swallowed her fears of public speaking and did The Daily Show last night - you know, for the kids...


As is usual for Jon Stewart, the best part of the interview was not aired:


Let's break this down:

- I know that some of you were looking for a show where Rhee is finally confronted directly for her mendacity and is called out for having ulterior motives. But everyone knows that Stewart doesn't do that: his m.o. is to kill with kindness. He knows he wouldn't get guests like Donald Rumsfeld if he gained the reputation of someone who goes for the throat - and I'm fine with that.

Because (like in his interview with Rumsfeld), Stewart gives Rhee the first real challenge to her nonsense that the mainstream media has seen in a good long while. Yes, I wish he had brought up the cheating scandal. Yes, I wish someone would straight up confront Rhee about her obvious resume padding from her short teaching stint in Baltimore. Yes, it's time she was held to account for her legacy in Washington, D.C.

But this is the first time I can think of since Rhee was humiliated on the BBC by the head of the British teachers union that she has actually had to defend her agenda beyond simple and stupid platitudes. Stewart, unlike the vast majority of the media, understands that Rhee has doubters, and those people have serious concerns that should be addressed. Further, in this segment Stewart does lay bare the truth that Rhee really has nothing meaningful to say about education - even if he neglects to point that out directly.

- Stewart asks Rhee about test scores and their use in teacher evaluation, questioning the accuracy of this metric for evaluating teachers. Here's Rhee's immediate response:

(Part 1, 2:25) When I got to D.C., I was leading a system where 8% of the 8th Graders in the city schools were operating on grade level in mathematics when I got there, and yet when I looked at the performance evaluations of the adults at the same time, 98% of them were being rated as doing an excellent job.

So when confronted with the notion that test scores may be an inaccurate way to judge teachers, Rhee immediately cites those very scores to contend that teachers must be doing a poor job.

This lack of logic speaks for itself.

- Immediately afterward, Stewart tries again: teachers are concerned that all of the stuff Rhee promotes will lead to teaching to an inaccurate test. Rhee, in answer, pulls the classic reformy dodge:

(Part 1, 4:10) Well, what I'm saying is that there has to be a balance. You don't want an overemphasis on the test, where that's the only thing that people are concerned about, and yet you can't have no accountability, right? Because we for a very long time in cities like Washington D.C. and places across the country we were producing generations of kids who were graduating from high school but they didn't know how to read and write and do math on grade level. So there's got to be a balance in there, and sort of fairness in there about it.

Glad to see we're shooting for "a sort of fairness" in teacher evaluations...

It is a long-standing myth, backed by little empirical evidence, that America has been producing generation after generation of dummies in our failing public schools. Certainly, we've had inequitable outcomes, but it's sheer lunacy to suggest that this has been caused by a lack of accountability for educators or the structure of our public schools: 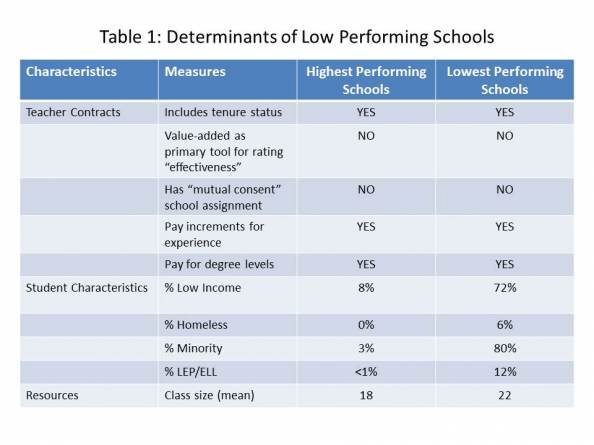 The American public school districts that are among the best in the world have tenured teachers, seniority, and step-guides; they lack merit pay, "choice," and test-based teacher evaluation. The primary difference between these "successful" systems and "failing" school districts are the characteristics of the students.

Listen to Michelle Rhee, and you will hear a woman who does everything within her power to avoid discussing this very obvious truth.

(Part 1, 4:40) I think the bottom line is that there is no one in the country that I know of who is advocating that we evaluate teachers solely on the basis of test scores. I think the vast majority of people who are reformers are saying we have to look at student achievement growth but we also have to look at other metrics and measures like observations of their classroom practice, surveys of kids in their classroom and the parents who send their kids to that classroom every day.

I notice that Rhee almost never acknowledges the enormous error rates found in test-based teacher evaluation, because that would undermine her entire call for "fairness." The truth is that the debate is over: VAM is "junk science," and everyone - including the reformers themselves - knows it is riddled with errors.

(I'll be honest folks - I've found this is the hardest thing to explain to lay people about why any use of tests to evaluate teachers is problematic. We have some real framing work to do here.)

- This next part made me absolutely crazy:

(Part 1, 5:40) So I remember talking to a teacher when I was in D.C. once, and she said, "You know what, I'm a good soldier. I'm not a rabble rouser. I just want to do the right thing for you, for the kids, for the district." She's like, "Can you just tell me what you want me to do?" She said, "Because I have this huge state curriculum, and I have all these learning standards. And then I have the standardized tests that we have to take, and these benchmark assessments, and the teachers guide, and the Everyday Math.,." You know, she's like, "All these things! Just tell me what you want me to do and I'll do it. But right now, there's just so much stuff." And I think that is absolutely is a frustration.

So part of what we have to do is be very clear with our educators about what great teaching to learning looks like, what do we expect to see when we walk into their classroom, what we're prioritizing, what's most important."

Got that, teachers? If you want to be a good soldier, then just do what Michelle Rhee - or whomever happens to be running your school district at the moment - tells you to do. Be compliant. Follow orders. Michelle admits that maybe we're giving you too many contradictory directions right now, but don't you worry your pretty little heads about that.

(By the way: am I the only one detecting more than a whiff of sexism here? This poor, flustered, overwhelmed teacher just "wants to be told what to do"? Golly, we'd better save her from herself; here, I've got some Pamprin for you, honey - just take it and do what we tell you, OK? 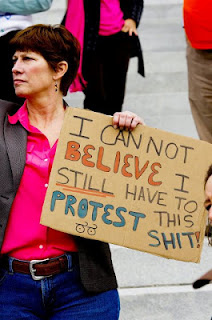 To put it another way: do you ever hear "reformers" talk about cops like this?)

There's no hint here that maybe the curriculum and the standards and the learning objectives should be generated from the ground up. No, what we need is better "leadership" from the top down. Don't worry, teachers, Michelle's good buddy and patron, old Uncle Eli, is working on that...

This is yet another symptom of the patronizing attitude toward teachers that permeates Michelle Rhee's worldview. Good teachers follow orders like good soldiers: that's what makes them good. Those awful "rabble rousers" are ruining things for everyone... 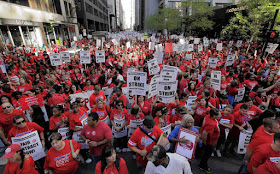 And let's take more of the actual decision making out of the hands of teachers, because the poor darlings are just so... you know... hysterical.

More in a bit. 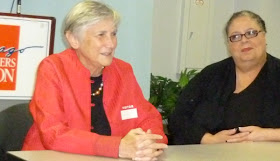 Two of my favorite "rabble rousers."