"It's Politicizing If You Disagree With Me!"

David Rosenberg of Teach For America is quite possibly the worst person in the world. This image from Rosenberg's Twitter feed comes via Kenzo Shibata on Facebook: 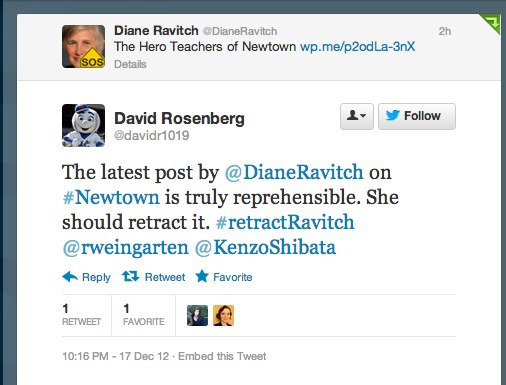 Notice that our boy Dave doesn't actually explain why he's got a problem with Diane's piece: its just obviously "reprehensible."

Ezra Klein, who I've had issues with before, describes the above phenomenon very well:

When we first collected much of this data, it was after the Aurora, Colo. shootings, and the air was thick with calls to avoid “politicizing” the tragedy. That is code, essentially, for “don’t talk about reforming our gun control laws.”
Let’s be clear: That is a form of politicization. When political actors construct a political argument that threatens political consequences if other political actors pursue a certain political outcome, that is, almost by definition, a politicization of the issue. It’s just a form of politicization favoring those who prefer the status quo to stricter gun control laws. [emphasis mine]

That is exactly right. What bothers Rosenberg and TFA is that Diane Ravitch is calling the reformyists out for the policies they advocate and the statements they make. Ravitch is making the obvious point, in contrast to their reforminess, that the brave teachers who died in Newtown were career educators and union members. TFA doesn't want anyone to think about this; thus, Rosenberg gets indignant, because he has no response. She's right, he's wrong, and that pisses him off.

By the way, here's what Diane said that Rosenberg found so very offensive:


Every one of the teachers was a career educator. Every one was doing exactly what she wanted to do. They’ve worked in a school that was not obsessed with testing but with the needs of children. This we know: the staff at Sandy Hook loved their students. They put their srptudents first, even before their own lives.


Oh, and be other thing, all these dedicated teachers belonged to a union. The senior teachers had tenure, despite the fact that “reformers” (led by ConnCAN, StudentsFirst, and hedge fund managers) did their best last spring to diminish their tenure and to tie their evaluations to test scores. Governor Malloy said, memorably, to his shame, that teachers get tenure just for showing up. No one at Sandy Hook was just “showing up.”
Governor Dannell Malloy has led the effort in his state to expand charter schools and high-stakes testing. He appointed a state commissioner of education who co-founded a charter chain. He said, memorably, that he didn’t care how much test prep there was so long as scores go up. Sandy Hook is not that kind of school.
Let us hope Governor Malloy learned something these past few days about the role of public schools in their communities.
Newtown does not need a charter school. What it needs now is healing. Not competition, not division, but a community coming together to help one another. Together. Not competing. [emphasis mine]

Oh, my stars! Ravitch pointed out that union membership isn't evil! And that the casual maligning of public school teachers that takes place every day by politicians like Malloy is what is "truly reprehensible!" And that test scores should be the least concern of those who care about our schools!

Poor, poor, David Rosenberg - he just can't take this level of truth telling! Quick, someone get him the smelling salts! 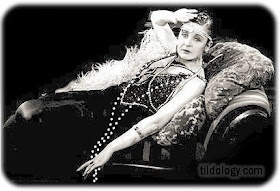 Mercy! Defending teachers unions is giving me the vapors!