Broad Infestation at the NJDOE

Jim Horn posts a stunning letter he received from a former employee at the New Jersey Department of Education. The letter is anonymous for obvious reasons. Take that for what it's worth, but keep in mind Jim's blog, Schools Matter, is an excellent resource with a solid track record. I'm inclined to take this at face value:


Below is an email I received from a former NJ DOE employee whose moral fatigue forced her from a good paying job with the State. Read it and then you will know why the Eli Broad calls his kind of philanthropy investments rather than grants.
_______________________

I am a former NJ DOE employee who resigned recently because I could no longer be a part of the extortion and fraud that is taking part there under the Broad Administration of Chris Cerf, Penny MacCormack, Peter Shulman, Bing Howell, ad nauseum.

Let's review quickly: the Broad Superintendents Academy is an unaccredited program run by California billionaire Eli Broad. ACTING NJDOE Commissioner Cerf is a 2004 "graduate"; I use quotes because he never received a degree or meaningful academic certificate. The Broad agenda is to bring corporate business practices into public schools, with a heavy emphasis on charters, standardized testing, and teacher evaluation using those tests. PAA has published an outstanding guide to the Broadies.

It's worth noting that Eli Broad has been heavily involved in the secret reshaping of Newark's schools since Cerfs arrival into the Garden State.


Cerf first tried to get rid of the County Exec Superintendents offices, but was stopped when the legislature reminded him that they were created by statute. How inconvenient! So he hired a Broad Intern (for $90,000 named Rochelle Sinclair) who came up with the idea to overlay the state with 7 Regional Achievement Centers (RACs) staffed with "Education Rockstars" from around the country (read Broad Academy grads) who would go in to schools that were failing, assess them, replace the principals and hire new teachers (Teacher 4 America, anyone?). The problem was the cost.

TFA, indeed. Its worth noting Newark's new Superintendent of Schools, Cami Anderson, used to run TFA, a program that takes recent college graduates who did not major in education and places them in city schools with a minimum of training. The results are predictable, as is the low rate of TFAers who stay in teaching.


Enter Arne Duncan and the NCLB waiver, plus the Race to the Top funding. Now Penny MacCormack is trying to divert the SES money we still have ($56 million)., to pay for the RACs. Oh, and we have thrown out the NCLB report cards and replaced them with our own in-house "measures of proficiency" which is a lot of speculative data manipulated by another bunch of Broad interns since none of the in-house data people would go along with this scheme. They have all been "rubber roomed" in other departments for not being "team players."

Some explanation: "SES money" means funds designated by the No Child Left Behind law to be used to provide alternatives for students who are going to what is designated as a "persistently dangerous school." Check out this notice at the NJDOEs website:


NOTICE
On February 9, 2012, the United States Department of Education (USDE) awarded the New Jersey Department of Education an ESEA Flexibility Waiver for the academic year starting September 1, 2012.  Reference to the SES program is included in the waiver. A copy of the State’s approved waiver application is located on the USDE’s web page at:http://www.ed.gov/esea/flexibility/requests.


"Additional information" is "evolving"; apparently, it's "evolving" right into these RACs.

As to the "measures of proficiency," this is yet another instance of the NJDOE's pattern of data abuse. It's very telling that the career staff is either being marginalized or is fleeing out the door.


So far, so good. Now, armed with his new proficiency data, Cerf has swooped down on a bunch of "underperforming" charter schools, presenting them with two options: we pull your charter, close you down, and your kids are on the street OR you select from this DOE-approved list of Charter Management Organizations (more Broad buddies) who will TAKE OVER YOUR CHARTER. This is extortion. The first to fall will be Paul Robeson Charter in Trenton which has a fund balance of $1.6 million. They are even forcing them to change the name of the school to Scholars Academy!!!

Now that is very, very interesting. Because the spin from the NJDOE has been quite the opposite; they're saying the local residents who founded the school are voluntarily stepping down:

Scholar Academies, a Philadelphia-based nonprofit charter school organization, will take over Paul Robeson. Adminstrators from Scholar Academies will run the school and current trustees will resign. While Gaeta will no longer be executive director, the plan calls for her to join the trustee board.
Scholar Academies already runs two schools in Philadelphia and another in Washington, D.C. The organization already has approval to open Trenton Scholars Charter School this fall with an expected enrollment of 567 students in kindergarten through sixth grades.
Department of Education spokesman Justin Barra called the Paul Robeson management overhaul a rare move, but praised the deal as a “bold and innovative approach” to save the school from closure.
“The department is excited about the opportunity here,” Barra said. “We felt it was enough to take the school off of probation and to renew them for another five-year term.”
The Department of Education should be credited for its continuing vigilance over underperforming charter schools. Revoking charters and closing schools that have become part of the community fabric should be a last resort because of the upheaval that creates for the public district that must absorb students.
That dilemma still remains for the Emily Fischer Charter School in Trenton, which is slated for closure at the end of this school year despite protest from families and students. Perhaps a similar solution could help salvage that school before it’s too late.

Oh, you can count on that! If the parents at Emily Fischer would just quietly let Scholar Academies come in, I'm sure the Broadies at the NJDOE will make all of the concerns about the school magically go away...

I'll try to get to Scholar Academies later (add it to my list growing list!). Let's just say for right now that they must know all the right folks at the NJDOE, but the people at Paul Robeson didn't.

That sounds like the plan, but I'd amend it a little:

Of course, all of this requires the gutting of the career staff at the NJDOE. Sounds like that's going quite well; the apparatchiks are clearly running the show... 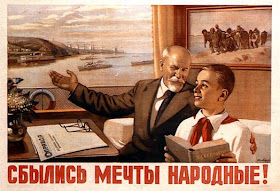 If you look carefully, you can see the "Trenton Makes, the World Takes" bridge!