You can count on Eva Moskowitz to never miss an opportunity to do one of two things:

1) Promote her brand.
2) Hobnob with the wealthy.

So there was no way she was going to pass up this two-fer:

Charter leader Eva Moskowitz hosted Ivanka Trump for a personal tour of a Harlem Success Academy school on Friday.
The morning excursion came one day after Moskowitz removed herself from consideration for U.S. Education Secretary under President-elect Donald Trump, saying she wanted to focus on the burgeoning charter network.
Moskowitz ascended Trump Tower to meet with the president-elect Wednesday but wouldn’t reveal if he offered her the position.
After meeting the clan patriarch, Moskowitz kept it in the family Friday and gave Ivanka a guided tour of Success Academy’s inaugural location in Harlem. The network now boasts a total of 41 schools.
Flanked by security, Moskowitz strolled into the building alongside her freshly established ally as school staffers looked on.
While Trump was greeted warmly at Success Academy, the visit raised eyebrows with employees at the public school it shares space with.
“Yet another downside of co-location,” quipped one staffer. “You’re exposed to this.”

Heh -- I wonder if the president-elect will demand via twitter an apology for saying that...

Moskowitz, an avowed Democrat, said she had voted for Clinton Thursday and had opposed Trump’s election.
But she said his pro-charter stance helped to ease her discomfort and that she hoped to assist him in developing policy that would benefit the sector. (emphasis mine)

Well, thank goodness Moskowitz's "discomfort" with having a xenophobic, unqualified, maniac president -- surrounded by a contemptible cast of racists, homophobes, misogynists, and anti-Semites -- has been "eased."

And all it took was the promise of a few more charter schools!

I wonder if all of Eva's students and their families are as sanguine about the next four years as she is... 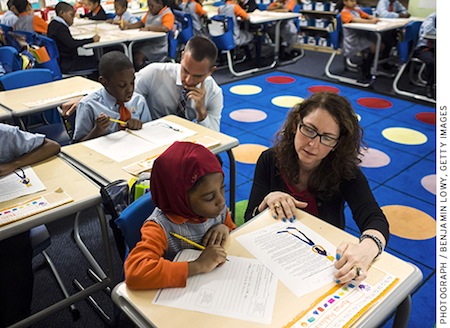 I and others have repeatedly gone over the tactics Moskowitz's charter chain, Success Academies, uses to game its scores: massive test prep, attrition without backfilling, a churn-and-burn faculty working very long hours, and tons of extra spending thanks to Eva's ties to Wall Street.

Those ties to big money had already established connections between Trumpworld and Moskowitz's burgeoning charter empire -- but I think there are actually some deeper connections worth noting.

Because as Moskowitz has shamelessly promoted herself, she's invited unwanted scrutiny. Which means that, unlike many other charter chains who carefully control their public image (for example...), we've been able to get a better sense of what actually goes on inside the Success Academies.

And it ain't pretty.

"Got-to-go" lists. High suspension rates, even for the youngest children. Vindictive actions against families who challenge the schools' public image. A learning environment so disturbing staff felt it needed to be recorded surreptitiously. Pressure on staff and families to participate in political rallies.

Earlier this year, Gary Rubinstein reviewed several videos SA has since retracted; see here, here, and here. I watched some of the videos before SA scrubbed them, and had a similar reaction as Gary:

This last video is long, but I was most struck by the first two minutes where the teacher (A TFA teacher, actually) is giving a pep talk before the activity, reading some non-fiction passages and answering 7 questions.  In the first two minutes the word “score” is said ten times.  At 4:43 a student mentions the state tests as a reason for learning about reading.  At 5:00 a second student chimes in and mentions the state tests.  These students have been trained well indeed!

The students do get opportunity to talk and answer questions and express ideas but this lesson is extremely ‘teacher-driven.’  Also, these are 6th graders doing a reading passage with 7 questions after they’ve already been through the Success Academy program for 3rd, 4th, and 5th grade test prep so this lesson seems a bit unnecessary to me.

As a teacher in a relatively affluent district, I find this emphasis on "teacher-driven" instruction to be quite foreign. Our evaluation rubrics are set up in a way that promotes student-driven instruction: we get good reviews when our kids are more active participants in their own schooling. SA, however, seems to put a heavy premium on authority: the teacher is to be given unquestioning, unconditional deference while the student gives up almost all agency in her own learning.

Eva Moskowitz doesn't seem bothered by any of this, or the many other troubling aspects of a Trump administration; in fact, it appears that she and Trump are largely on the same page. She's already normalized an authoritarian style of education for students of color; why wouldn't she also normalize the president-elect's behaviors by going over to Trump Tower and kissing his ring?

Trump is going to be a powerful ally in Moskowitz's ongoing war with Mayor Bill de Blasio. This "longtime Democrat" need only avert her gaze away from all of the further outrages The Donald will foist upon this country and, specifically, her students in the days ahead.

Normalizing deplorable conduct is, for some, a small price to pay to get everything you want...

Eva says: "I stand ready to support his efforts in any way I can."