What We Don't Know About Gulen-Linked Charter Schools, And Why That's a Problem

UPDATE: I changed the pie chart for this post, based on a data correction for charter management organization (CMO) shares. See here for the details.


This week's attempted coup in Turkey will inevitably turn the spotlight on Fethullah Gulen -- the primary political rival of Turkish President Erdogan -- who lives in seclusion in Pennsylvania. Gulen is linked to a network of over 160 charter schools operating across the country, including several in New Jersey that Governor Chris Christie has recently praised.

I've written several pieces about Christie's love affair with Gulen-linked charters here in New Jersey -- see here, here, and here. Even though I've looked at these schools closely, I won't claim I've exhaustively researched the entire Gulen movement, otherwise known as Hizmet, and its connections to US charter schools. Still, from what I have read, it's clear that there certainly is a network of charters connected to Gulen. The proliferation of these charter schools has been reported on by CBS News, The Atlantic, The New York Times, and The Wall St. Journal. This is hardly tinfoil hat territory.

That said, there's quite a bit we still don't know about these schools:

- The charters linked to Gulen generally do not express their connections openly. While Hizmet is clearly a religious movement, there is no indication the charters ever proselytize. Charter leaders may express their admiration for Gulen, but they do not, so far as I've ever seen, admit to taking direction directly from him when it comes to the administration of the charters.

- This said, there is at least an informal network that binds these charters together, and that network is aligned with Hizmet. The website Gulen Charter Schools has documented, in great detail, the structure of this network, which includes not only the charters themselves but also related contractors.

- These schools employ staffs that consist of large numbers of Turkish nationals, although not exclusively. There are many reports that the schools use H1-B visas to bring teachers into the US from Turkey; however, there appears to be no definitive documentation of just how many charter staff members in the network have entered the US through this channel.

- There are also reports of staff members giving kickbacks on their salaries and income tax refunds to their employers. Again, however, we don't have documentation of how widespread this practice may be; further, the allegation has not yet had the chance to be held up in court.

- Federal authorities have raided several Gulen-linked charter schools and continue investigating the schools' relationships with their contractors. Again, however, no charges have as of yet been filed; consequently, no allegations have been held up in court.

- A USA Today investigation found that Gulen-linked organizations paid for Congressional members and staff to travel to Turkey at least 214 times. Expenses total at least $800,000, but that figure is likely understated because it does not include in-country expenses.

Given what's just happened, this lack of transparency is a real problem for our country's national security. If, in fact, Hizmet was one of the driving forces behind the attempted coup, the United States may well be complicit in allowing a charter network to grow in this country that provided de facto support for the attempted overthrow of one of our NATO allies' governments.

I don't have any expertise in Turkish politics. By most accounts, Erdogan is not a friend of democracy and freedom of the press, and that's very troubling. And Gulen denies any involvement with the coup attempt, even though Erdogan is now saying the US risks its continuing alliance with Turkey if it continues to harbor him.

At this point, we must ask: Has it been in America's best geopolitical interest to prop up Erdogan's primary political foe by allowing an aligned network of charter schools to grow across the country? Has the risk been worth what are, at best, marginal gains in test scores for student populations that, at least here in New Jersey, look nothing like the populations of their hosting public school districts?

Further: these Gulen-linked schools are merely one of a host of charter networks about which we know next to nothing: 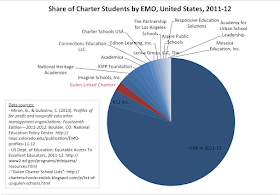 Once again, this is a graph from data I compiled based on work by Gary Miron and Charisse Gulosino. Yes, economists have studied the outcomes for charter chains like KIPP fairly extensively. But what do we about all the others? Who are they aligned with? Who are their contractors? Who do they hire to teach? What networks may operate behind the scenes of these schools?

My quick tabulation shows the Gulen-linked Cosmos Foundation (since renamed Harmony Public Schools) controlled 18.5 percent of the total enrollment of Texas charter school students in 2011-12.* That's nearly 20,000 students -- each a source of taxpayer funds that go... where, exactly? Do we really know? Shouldn't we care?

Look, I won't pretend we haven't had problems -- in some cases, big problems -- with fiscal opacity in public district schools. But charter schools, because they are not state actors, are not subject to the same standards of transparency as public district schools. Once the money flows past the non-profit shell of a charter school and to its aligned management organization or property lease holder, all bets are off.

We are now seeing a very real and very serious consequence of this lack of transparency. It's not at all an exaggeration to say our national security interests may have been compromised by allowing this network to flourish within our borders -- and, again, for what?

It's well past time to clean up the charter school sector. Standards of transparency and accountability have got to become much tougher. Americans have every right to know who, exactly, is running their schools and under what circumstances. If the Turkish coup and the growth of Gulen-linked charter schools teaches us anything, it's that the consequences for not properly regulating the charter sector are potentially serious and far-ranging.

One more thing: I've noticed some rumblings on social media that criticism of Gulen-linked charter schools might be motivated by Islamophobia. I obviously can't speak for every critic, but that strikes me as far too facile. The problem with Gulen-linked charter schools isn't about the particular religion Hizmet subscribes to; its about the total lack of transparency in these schools' management.

The Gulen movement is now front and center on the world stage. The leader of one of our most important allies has accused the movement of supporting a military coup. And that movement is clearly linked to a substantial number of charter schools in the United States, which are supported by taxpayers' monies.

Is anyone seriously prepared to suggest being concerned about this is somehow tantamount to racism?

ADDING: I have not yet seen Killing Ed, but it looks fascinating.

Why are we relying on independent filmmakers to investigate this stuff? Why haven't the state and federal agencies in charge of charter school regulation been looking into this before allowing charter schools to flourish nearly unchecked?

ADDING: From a 2011 article in the Philadelphia Inquirer (which has, over the years, done some really excellent reporting on charter schools):

Fethullah Gulen is a major Islamic political figure in Turkey, but he lives in self-imposed exile in a Poconos enclave and gained his green card by convincing a federal judge in Philadelphia that he was an influential educational figure in the United States.
As evidence, his lawyer pointed to the charter schools, now more than 120 in 25 states, that his followers - Turkish scientists, engineers, and businessmen - have opened, including Truebright Science Academy in North Philadelphia and another charter in State College, Pa.
The schools are funded with millions of taxpayer dollars. Truebright alone receives more than $3 million from the Philadelphia School District for its 348 pupils. Tansu Cidav, the acting chief executive officer, described it as a regular public school. [emphasis mine]

The national Gulen charter school network has been confirmed by Gulen's own lawyer. Except:

Federal officials declined to comment on the nationwide inquiry, which is being coordinated by prosecutors in Pennsylvania's Middle District in Scranton. A former leader of the parents' group at the State College school confirmed that federal authorities had interviewed her.
Bekir Aksoy, who acts as Gulen's spokesman, said Friday that he knew nothing about charter schools or an investigation.
Aksoy, president of the Golden Generation Worship & Retreat Center in Saylorsburg, Pa., where Gulen lives, said Gulen, who is in his early 70s, "has no connection with any of the schools," although he might have inspired the people who founded them.

So Gulen was involved in founding the schools, except he wasn't.

The American charter schools were a central part of Gulen's argument that won him a green card after the Department of Homeland Security ruled that he did not meet the qualifications of an "alien of extraordinary ability" to receive a special visa.
In a lawsuit Gulen filed in U.S. District Court in Philadelphia in 2007 challenging the denial, his attorneys wrote: "In his position as the founder and head of the Gulen Movement, Mr. Gulen has overseen the establishment of a conglomeration of schools throughout the world, in Europe, Central Asia, and the United States."
His attorneys also referred to a letter of support from a theology professor in Illinois who described Gulen as "a leader of award-winning schools for underserved children around the world, including many schools in the major cities in America."
On July 16, 2008, U.S. District Court Judge Stewart Dalzell ruled that Gulen met the requirements for a green card.