Dear Bill Maher: Here's Why You're Wrong About Tenure

Let's dispense with the fanboy stuff first: I think you're great, I really liked Religulous, I think ABC screwed you over, and you come closer than anyone around today to keeping the spirit of America's greatest political philosopher, George Carlin*, alive.

But on teacher tenure you are just dead wrong:

What exactly is the argument for teacher tenure? According to the teacher's union's lawyer, "Tenure is an amenity, just like salary and vacation, that allows districts to recruit and retain teachers despite harder working conditions, pay that hasn't kept pace and larger class sizes."


...Okay, but so is offering them a car. That's not an argument for why the teaching profession should be virtually immune from the normal threat of termination that just about every other employee in the nation lives under. Additionally, Hollywood writers, producers, and directors all have unions, but none provide any sort of protection like tenure; they mainly exist to argue for compensation and benefits. If you don't do your job, you still get fired. As it should be. Because this is America, and some amount of job insecurity is a good thing. It's why when you go to Greece or Italy you find yourself in a line 15 people deep because the person behind the desk doesn't really care about helping you. Because they're never getting fired.


Shouldn't teachers' unions drop tenure and focus on compensation and benefits too?

Let's start with this: I don't see anyone offering me a guaranteed new car every year in exchange for my workplace protections. In your construction, Bill, we teachers will give up our tenure in exchange for some extra compensation that will continue in perpetuity. Forgive us, but we've heard this one before, and it's always turned out to be a crock.

The truth is that if we give up tenure -- something our predecessors fought for and earned after a long struggle -- there might be some small bump in wages or benefits on the front end... but it will quickly be erased as life without tenure becomes the new norm. We might be teachers, but we are neither stupid nor naive: we're not about to give up our hard-earned protections on the easily breakable promise of more money.

But I don't know why you, Bill, as an advocate of smart government spending, would want to trade tenure for more dough -- which has to come out of your wallet -- anyway. Teacher tenure costs the taxpayer next to nothing, yet teachers themselves value it. Unless you can prove that tenure hurts students, why would you or anyone advocate for taxpayers to give up such a good deal for their own pocketbooks?

And that really is the most important point to be made about this: teacher tenure has never been shown to affect student achievement. There is simply no correlation between teacher tenure and student performance. High performing states and high performing countries like Finland all have teacher tenure - it's clearly not an impediment to student learning there. When it comes to academic outcomes, tenure is a non-issue.

But still, the idea of tenure pulls on the heartstrings of the gullible private sector employee something fierce: "Why can I be fired at any time and you can't?" Except if you ask just about any HR manager in the private sector, they'll all tell you the same thing: you can't just fire any employee whenever you want. Anyone firing a worker, even for cause, better have their ducks in a row, or there will be hell to pay. The notion that teachers have protections far and away above those of any employee is a notion that is way overblown.

That said, I will grant you that teachers enjoy a somewhat higher level of workplace protection than private sector employees. But you know what, Bill? You should be damn grateful they do. Our new, reformy world is already running the risk of turning our public school districts into hundreds of thousands of Tammany Halls all over the country; how much worse would this be in a system where tenure was eliminated?

Tenure doesn't just protect teachers; it protects taxpayers. Are you really so confident in the good will of local politicians that you are willing to turn over millions of teaching jobs to them, confident that they will put the interests of children above their own? Are you really certain that these city- and town-level pols will gladly reward great teachers -- no matter their political allegiances? Even those teachers who might challenge school administrators and boards of education on policies that are not in the best interests of students?

I didn't think so.

Furthermore: for a guy who loves to mock evangelicals, I find your insouciance about fundamentalists taking over school districts to be more than a little incongruous. Do you know what kind of crap is being foisted on children who go to private schools (funded by public voucher dollars) with teachers who aren't covered by tenure? Are you comfortable with a system that denies teachers the ability to stand up and demand that their students learn actual science and history in the face of overt political pressure?

By the way: when I and my colleagues start making more than a tiny fraction of what Hollywood writers, directors, and producers make, I'll be glad to draw some equivalencies. Until then: try getting someone to take your call about a gig directing your latest project that pays $55,418 a year. Some comparisons are so silly they aren't even worth considering... 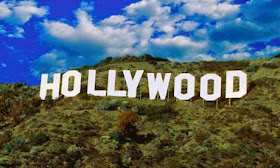 
* Bill, you might be wondering why I put up a link to a "bleeped" version of my favorite George Carlin rant on this blog.

Simple: I don't want to get fired.

Can you start to see why maybe tenure means something to people like me?