The Petty Jealousy of Arne Duncan

I would say this is simply unthinkable, but when it comes to Arne Duncan, I've come to believe the worst is always possible:


U.S. Education Secretary Arne Duncan and at least one other Education Department official urged New York Mayor-elect Bill de Blasio and his team not to choose Montgomery County Schools Superintendent Joshua P. Starr as the city’s next schools chancellor, according to several people knowledgable about the selection process. It was an unusual move by the nation’s top education official and came in the wake of Starr’s vocal criticism of some of the Obama administration’s school reform policies. [emphasis mine]

Yes, folks, it's true: the SecEd, who has done everything he possibly could to overstep his bounds and dictate state and local education policy, apparently thinks is OK to sabotage the careers of people who dare to disagree with him:

Some high-profile educators — including Starr, a Democrat — have criticized the Obama administration’s signature education program, Race to the Top, in which states and districts could win funding if they enacted Duncan-approved school reforms, including the expansion of charter schools and the evaluation of teachers by using student standardized test scores to determine a teacher’s “value” in the classroom.
Starr, who runs Maryland’s largest school district, just miles from the White House, became nationally known last year when he made a call for a three-year moratorium on high-stakes standardized testing, a central component of Duncan’s school reform policies. Starr said the country should “stop the insanity” of evaluating teachers according to student test scores, calling it a flawed method.
Duncan spoke negatively about Starr to de Blasio in a discussion about a number of candidates, people familiar with the discussions said. Duncan did not return phone calls seeking comment. Duncan spokesman Massie Ritsch, asked about Duncan’s conversations about the chancellorship and his objections to Starr, said he “declined to comment on private conversations between the mayor and secretary.”
“Secretary Duncan looks forward to working with Mayor de Blasio, Chancellor Farina and their team,” Ritsch said in a statement. “He wants to do whatever he can to support continued progress for students in New York City.”

"Continued progress"?! You mean under Bloomberg, whose takeover of the NYC schools has been a disaster? Whose policies New Yorkers rejected in droves?

What's amazing to me about all this is that Barak Obama has explicitly said he is against the expansion of standardized testing, even as his SecEd pushes Race To The Top, which ties teacher evaluation to that testing. A guy like Joshua Starr comes along and points out the contradiction... and Duncan goes out of his way to squash the man's career. If that isn't petty and vindictive, I don't know what it.

Of course, unlike Arne Duncan, Joshua Starr has some actual experience, training, and credibility:

Dr. Starr began his career as a special education teacher in New York City, working with students with emotional and behavioral disorders. He held administrative and executive positions in urban and suburban school districts and served as Director of School Performance and Accountability for New York City Public Schools, the nation's largest school district. From 2005 to 2011, Dr. Starr was the Superintendent of Stamford (Conn.) Public Schools, where he distinguished himself by increasing academic rigor for all students, standardizing curriculum, and building partnerships with the civic and business communities.


Dr. Starr is a proud graduate of the University of Wisconsin, earned a Master’s degree in special education from Brooklyn College, and holds a doctorate degree in administration and social policy from the Harvard Graduate School of Education.

As Carol Burris, America's Principal™, pointed out, Starr has been the object of some gratuitous attacks by the reformyists, including Checker Finn. What seems to bother them the most, however, is that the man actually walks the talk:


In 1976, the Connecticut Advisory Committee to the US Commission on Civil Rights initiated a review of the status of Stamford’s progress with desegregation and expressed concern that middle- and high-school ability grouping was re-segregating classrooms, with high-track students being predominantly White, and low-track students being predominantly Black or Latino. When Dr. Starr arrived in 2005 as Superintendent, nearly 30 years after the report, no progress on improvement recommendations had been made. There were up to five tracks in the middle schools. Although only 40% of all students in the district were White, nearly 79% of the honors track was White. Conversely, although 53% of the district’s students were Black or Latino, only 11% of the honors track was Black or Latino. In the three lowest tracks, however, about 73% of the students were Black or Latino. It was as if two separate school systems existed.

Josh Starr characterizes the Stamford schools as being like “the wild west” when he arrived—no curricular structures, with everyone doing their own thing. When I spoke with him he jokingly remarked that there were 20 schools with 80 different ways of doing business.

Josh Starr took all of that on. He led a middle school transformation committee to review data and grouping practices and to create a curriculum for all students that would be based on rigorous standards. The committee was charged with reviewing the organizational structure of the middle school and, based on research, recommend the strategies and structures that would achieve the goal of challenging learning opportunities for all of Stamford’s children. To help fund the transformation initiative, Starr secured a $27 million dollar grant from The General Electric Foundation. He created a relationship and alliance with the local NAACP and the Latino community and began to talk openly about race, encouraging difficult conversations within the boundaries of respect and community norms.

The Middle School Transformation Committee attracted serious and committed school and community members, and recommendations including changes to the rigid tracking system that was responsible for de-facto segregation. State test scores went up for all subgroups, with accelerated growth for Black and Latino students. A survey of parents, students, and teachers showed positive reactions to the reform. The percentage of Black or Latino students in the honors math track increased from 11% to 30%—a dramatic shift in the proportion of student groups in the highest track.

And that was when fierce opposition arose. Integrated classes were not universally welcomed.

Joshua Starr held his ground despite the opposition. In an opinion piece on the topic he stated, “Some may think we have a choice about eliminating tracking. I do not. If we want to live up to the ideals of social justice and equity long espoused by our community, we must ensure that each and every one of our children has access to a curriculum based on high standards that prepares them to graduate ready for higher education and success in the 21st century.” In Starr’s words, the reduction in tracking became “the hill that he was willing to die on.” Stamford Schools are better, more equitable places for the six years that Josh Starr spent there. [emphasis mine]

Now let's compare this to the record of Arne Duncan - a man who was never a teacher, has no degrees in education, never did any serious work in education policy design or research - when he was chief of Chicago's schools:

Today the New York Times (via Corey Robin) has a piece on a new report about segregation in public schools around the country. Some of it should sound familiar:
Segregation of Latino students is most pronounced in California, New York and Texas. The most segregated cities for blacks include Atlanta, Chicago, Detroit, Houston, Philadelphia and Washington.
“Extreme segregation is becoming more common,” said Gary Orfield, an author of the report who is co-director of the Civil Rights Project.
Going deeper into the report puts “most segregated” in more context. For instance, their data on the percentage of black students in minority schools, broken down by metro area. The highest percentage of black students in 50-100 percent minority schools is Los Angeles, at 94.1; Chicago ranks sixth.
If you narrow that to 90-100 percent, Chicago is number one, at 71.8—meaning that 70 percent of all black students in the Chicago area attend schools that are over 90 percent minority.
Narrowing it further to 99-100 percent, 48.5 percent of black students in Chicagoland—half, essentially—attend schools with basically full minority enrollment. That’s a level of extreme segregation ahead of even Detroit-Livonia-Warren, at 47.9 percent. New York-Newark-Edison is third, but at a mere 31.4 percent. Only Los Angeles also tops 30 percent.
Chicago-area schools also top the “dissimilarity” index for black and white students: “a handful of areas experienced extreme school segregation (dissimilarity index score of higher than .70),” a score that indicates 70 percent of that population would have to move in order to achieve even racial distribution. Chicago is at .79 for black-white dissimilarity, the highest, and it’s also the highest for black-Asian, black-Latino, and Asian-Latino, and fourth-highest in white-Latino. By geographic segregation, Chicagoland schools are essentially the most segregated in the country. [emphasis mine]

I won't lay this all at Duncan's feet; Chicago has a history of school segregation. But it's clear the SecEd did little to address the problem; in fact, his policies of closing "failing" schools and charter expansion likely made things worse (it certainly didn't help Chicago's mediocre test score gains under his reign). That's hardly surprising: as Richard Rothstein points out, Arne Duncan has done little more than pay lip service to the problems of desegregation throughout his term.

In the end, it looks like New York's schools are going to be fine. Carmen Fariña, like Joshua Starr, is everything Arne Duncan is not: credential, respected, experienced, and successful. But this incident speaks volumes about Duncan: he went out of his way to keep Starr from taking over NYC's schools because the man doesn't want to rush to implement Duncan's failing policies.

Arne Duncan's petty actions, however, tell the truth: the last thing reformy types want are real educators standing up to their nonsense. 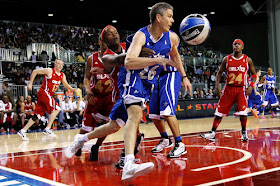 Mr. Secretary, stick with what you're good at, OK?

ADDING: The WaPo story was a great piece of journalism, once again, from Valerie Strauss. Bezos, you'd better keep her!