When Leonie Haimson sent this tweet, at first I thought she was joking:

StudentsFirst is, of course, Michelle Rhee's corporate reform shop, famous for their astroturfing. "#wbd" is Won't Back Down, a piece of anti-union propaganda disguised as a movie; it's getting trashed by the critics.

Sure enough, SF is now using Eli Broad and David Tepper's money to pay their staff to write glowing reviews and put them on the Rotten Tomatoes website:

Well, at least they say they work for SF...


Diane Ravitch posted a few days ago about an email that went out to some Floridians from StudentsFirst, Michelle Rhee's reformyist lobbying group. The email offered people a chance to win a restaurant gift card if they posted reformy comments at various websites about education news stories. As Parents Across America describes it:

Michelle Rhee’s StudentsFirst is well known for its deceptive tactics of posting seemingly harmless petitions calling to an end to student bullying, for example, or opposing firing good teachers, and then claiming all the people who unknowing sign them as one of their members. Even well-informed PAA members, completely opposed to the goals of this astroturf group, have been caught in her trap.

When Ravitch and Bob Sikes (he's kind of like a Florida version of me) published the email, the author, Catherine Durkin Robinson, did what reformyists do best: she threw a hissy fit for anyone daring to point out what she was really up to. Her response is the second comment on Sikes's post:


My record is clear.
As a 25-year veteran of campaigns to end apartheid, support animal rights, protect a woman’s right to choose, bring recycling to college campuses, champion the rights of the LGBT community…
As an 8-year teacher of at-risk youth and ESE students…
As a canvasser for Dukakis, Clinton, Gore, Kerry, and Obama in rural Pasco and Polk counties…
As a concerned mom and PTA officer…
…nothing prepared me for the level of nastiness and vitriol that descended upon me when I took this job and began to vocally advocate for policies that put students first.
But nothing will deter me or scare me away. Because last week I spoke with a mom who’s only hope of putting her son in a good school is to break the law and pretend to live in another district. I’ll keep fighting against powerful union and school board interests. I’ll keep fighting…to help her.
And shame on the rest of you.

Don't you just love how these people think their crusade to gut teacher workplace protections, de-unionize the profession, implement merit pay schemes that they run away from when they don't work, and upend democracy through parent "tricker" nonsense...

... a crusade paid for by corporate education privatizers and oligarchs (keep reading)...

... a crusade run by people like Rhee who got mediocre results by their own standards when they were educators themselves (and those standards are suspect to begin with) ...

... don't you just love how, when criticized, these people immediately shield themselves by lumping in their activities with anti-arparthied activists and GLBT rights advocates?

And how! These people and their goofy antics are hours of endless fun. Restaurant gift card giveaways, on-line movie shilling... and it's all for the kids! Shame on you for thinking otherwise!

I really do wonder how long these billionaires are going to continue to fund this bush league nonsense. At some point, won't they just become too embarrassed by the tackiness of it all? 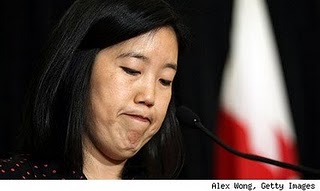